I’ve been in my new class for about a week now, and I’m loving it so much already!  We just had a “class day” where we tried to get to know each other.  As a part of it, we were put into groups and we had to make a video about a famous Dane.  I was with Luna and Leon, and we decided to make our video about Hans Christian Anderson.  For those of you don’t know, Hans Christian Anderson was a writer from Odense that wrote stories such as The Little Mermaid and the Ugly Duckling.

Our video was very sarcastic, but actually full of real information!  If you want to learn about him more and see the video that we made, just use the link below!

Hope you guys back home are all doing well, hope to talk to you all soon! 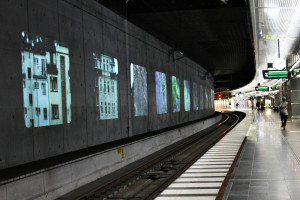 I had been staying at my friend Sami’s house in Copenhagen, and after waking up at 11:00, we decided to take a spur of the moment trip to Sweden. (Yes, people just do that in Europe.) From Copenhagen, the tickets only cost about 60 kr. (12 dollars) to get to Malmö, a nearby city in Sweden. The first big difference that we noticed were how nice the underground train stations were. I mean, really, they were super beautiful for being underground.

Sweden itself is not really that different than Denmark, but it’s a whole new country, which brings subtle differences that make it very interesting to explore. To start with, Sweden is Sweden, which means we have to relentlessly make fun of it because that’s what the Danes do. The language, Swedish, is different, though not too hard to read with our knowledge of Danish. We withdrew some Swedish kroner from the bank, though we really had no idea how much it was worth. Oh well, I guess that’s part of the adventure.

I wasn’t kidding, there really was a huge bedside lamp

We really didn’t have any plans, other than exploring and buying souvenirs, so that’s exactly what we did. In the tourist stores, we spoke only Danish so that we could show our Danish superiority and make ourselves seem really Danish. (And it was good practice too!) I ended up buying a patch for my Rotary jacket and a magnet with trolls that looked really Swedish. When walking around, we went to a downtown square, and then out in the middle of fricken nowhere is a huge bedside lamp the size of a house. No, I’m not kidding, I took pictures. Why, Sweden, why?

We decided we were super hungry, so we went to get a quick burger from a Swedish burger restaurant called MAX. Menu in Swedish? No problem, we got this. We ordered two “originalmål”s because they looked good, but unfortunately “mål” in Swedish means “meal,” so we ended up with huge burgers, complete with fries and medium sodas. I do have to say, though, it may have been one of the best burgers I’ve tasted, so I’d recommend anyone to go there and order what I (accidentally) did. 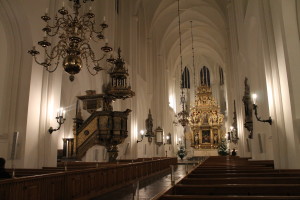 A beautiful church in Malmö

But of course, if one is in another country, they must try pastries of that country, which led us to a local cafe, where we bought some delicious cake. (Not as good as Denmark’s, but still delicious)

We walked the streets and came upon an old beautiful church. It was gorgeous – well, the pictures should speak for themselves.

After walking around the streets and walking into interesting stores, (Such as “The English Store,” which sold pop-tarts, skittles, and the works,) we said goodbye to Sweden (literally, and in a french accent) and went back to the train station.

Despite my sarcasm, I really enjoyed spending the day in Sweden, and I hope that I’ll be able to come there again. 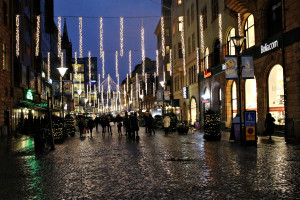 Posted in Denmark | 3 Comments
Tweets by @CameronNeader
Get Email Updates
Enter your email if you want to get a notification when I write a new update on my exchange! (If you use Gmail, you might have to look in "Promotions" tab to see the emails)
Older Posts