In a few days, I’ll be reaching my 6th month of being here. Yes, half of a year. I can’t even comprehend how fast time has gone – it feels like I just got here, and yet I can’t imagine myself living anywhere else.

I apologize for being so bad at updating blogs…there’s so much to do here that I always have something planned! In this post, I’ll just mention what I’ve been up to in this amazing country.

Last weekend I went up to Frederecia to stay at my friend’s Norah’s house to see some of my exchange student friends. I was finally reunited with Becca Constant from Detroit, Alex Hildebrant from Canada, and Norah Galea from Canada. You can only imagine the shenanigans we had during our little exchange student sleepover. (And by shenanigans, I mean singing along to “Barbie Girl” and watching Aristocrats.) 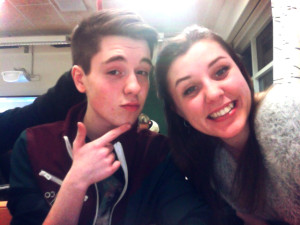 Chilling with my friend Luna from my new class

I’ve now been in my new class for a month now, and I really love the people I’m with. For those of you who don’t know, in Denmark we have all of our classes with the same 30 people, so when I switched in January, I was with a whole new group of people. I’m now in the music class, which is surprisingly harder work than I’d thought! We’re currently studying triads and intervals indepth and I’m learning stuff in Danish that I didn’t even know in English! There’s so many amazing people in my class, and I hope that I can get to know even more of them.  On Wednesday, about 9 from my class hung out at McDonalds where we ate the food of my home country and played in the playplace.

I’m really excited for the next week, because Friday is the last day before “Winter Break” where I’ll get a little 9 day vacation. My host family is going to take me to their summer home in the city of Skagen, which is located at the Northernmost part of Denmark, and they’re also going to take me to Silkeborg for a day. I’ve heard that both cities are absolutely beautiful, and I’m so excited to see them and spend time with my amazing host family! 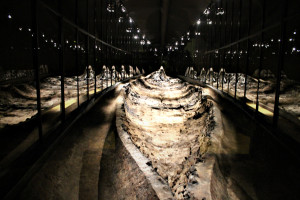 Imprint of a real Viking ship!

A few weeks ago, I also got to go on a little trip to Langeskov and Kerteminde (Two cities on Fyn) with my host sister, host mom, and host grandparents! In Langeskov, they took me to a site where there used to be a Viking ship! (How fricken cool is that??) The ship itself wasn’t there, but we could see what was left of the ship and the bones of the horses left on the ship. There was a museum there where I got to learn more about the Vikings, and I fell into the tourist trap by buying lots of viking-related souvenirs.

Thanks to my amazing Rotary club, I have a bus card that allows me to travel my island for free on busses and trains, and for half price on all public transportation in Denmark outside of Fyn.  I’ve been abusing this card by traveling whenever I possibly can.

In front of Nyhavn in Copenhagen

Aside from going to Odense everyday, I’ve been to Copenhagen 3 times in the past month, and I spent a total of 7 days there.  When I was there, I got to see the infamous Little Mermaid statue, Nyhavn, Amalienborg, Round Tower, Tivoli, and the queen of Denmark. (Yes, I really did see her)  Whenever I’m in Copenhagen, I also get to see Brooklyn (Canada) and Sami (Wisconsin), who are two of my best exchange friends, and we’ve had lots of memorable times there.

As the year goes on, more of my exchange friends are starting to leave the country. Two weeks ago, my friend Amber from Australia had to return to her country since she was only on a 6 month exchange, and I went to Copenhagen to say goodbye to her at the airport. My friend Elle from Minnesota is also leaving tomorrow, and I’ll hopefully see her tonight before she goes. I’ve gone to language school with the two of them every tuesday since I arrived 6 months ago, and it’s not going to feel right when they’re not in the country with me. My Danish friend Josie returned to Chicago at the beginning of the year, and many of the Australian exchange students have also left. It’s really sad to see these people go, because I don’t know when I’ll see them next or if I ever will. I’ve made so many amazing friends here in Denmark, and I can’t even imagine how sad it will be for me to leave at the end of my exchange.

I’ve been thinking a lot of the future, lately – there’s so much to look forward to and so much to dread. Soon I have to choose which classes I’ll be taking next year, and I’m really not looking forward to it. It’s made me realize that while I’m in Denmark, I’m not really living in reality – right now I’m living the carefree life of an exchange student, but there’s a life awaiting me that has actual obligations, responsibilities, etc. While I’m here, I try to make the most of every day, and I try to take advantage of any freetime I have to do something memorable. It’s really bittersweet to think of how fast the end of my exchange is coming – I have my friends, family, and school waiting for me back in Wisconsin, but I have all of those in Denmark, too, and I can’t imagine leaving them.

A few days ago I just put in my final payment and I’ll be going with my choir class to Riga, which is the Capital of Latvia! Even though I’ll just be there for a few days, I’ll most likely have a host family there, which is super cool. I’ve also been receiving more information about the upcoming Eurotour lately, and I’m really looking forward to it! Starting May 14, I’ll tour Europe for 18 days with about 50 of the Rotary Exchange students. Throughout the trip, it looks like we’ll be going to the following cities:

Clearly this is going to be an amazing trip, and I’m so glad that I’ll be sharing it with so many amazing people!

This part is totally not exchange related at all, but this blog is about my life, so it’s relevant to post anything that I feel is important to me. My favorite band Paramore released their music video for my favorite song “Ain’t it Fun,” and I’ve waited for it for 8 months, so this was a huge deal to me!  I have also finished watching all of the episodes in the modern series of Doctor Who, which I have been addicted to since one of my Danish friends showed it to me in November. The horrible game of “Flappy Bird” has also flapped into my life, and I play it even though I can’t stand it. (And my high score is only 23, feel free to laugh at me)

I think that perfectly sums up my past month! I hope you guys enjoyed this entry, and I’ll try to post more like this in the future.

Posted in Denmark | 3 Comments
Tweets by @CameronNeader
Get Email Updates
Enter your email if you want to get a notification when I write a new update on my exchange! (If you use Gmail, you might have to look in "Promotions" tab to see the emails)
Older Posts