January and Tour of Western Turkey 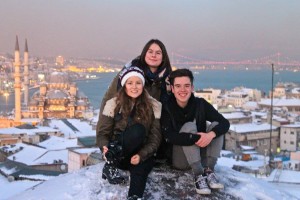 [Posting this a bit late…this is becoming a habit] I can’t believe that it’s 2016 already! There has actually been a lot of snow here – and by “a lot” I mean “a lot for Istanbul.” A few inches of snow can create 7 hour traffic jams, close school, and make everything look beautiful. While I normally hate snow, it’s actually beautiful in Istanbul and I am always happy to see school closed. My Brazilian and Mexican friends had never seen snow before, so it was an absolute joy to see how happy they were seeing it for the first time. I started out 2016 in a great way – meeting two AFS exchange students at Büyük Valide Han, a place in Istanbul that with an incredible view of the city. Meeting them really reminded me of how many more amazing people I have yet to meet this year.

I’ve gotten more comfortable with Istanbul than I thought I ever would. It’s not a big deal for me to go to Asia after school and come back to Europe before dinner. If I have freetime, I can always go to neighborhoods like Taksim, Eminonu, or Galata (my favorite area in Istanbul). My turkish friends always joke that I know Istanbul better than them, which is actually probably true. I only have a year in this beautiful city, so I’m trying to see everything that I can in this short amount of time.

Every week I’m getting closer with all of my friends here. I’ve gotten to hang out with a lot of my Turkish friends by hanging out with them outside of school, in places like the Taksim, Grand Bazaar, cafes, etc. I really feel like I’ve been making some great close friends from school, which has been a pleasant surprise considering basically nobody talked to me for the first 2 weeks. Only having a few months to get to know them seems like such a short time since there’s so many of them that I want to know, so I hope that I can spend a lot of time with them outside of school in the next few months. (If you go to my school and you’re reading this, you’re more than welcome to send me a message if you ever want to hang out!) 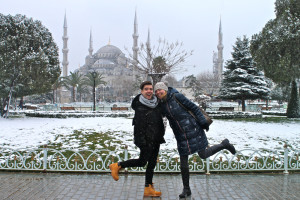 Sultan Ahmet with my Romanian friend

A few other highlights of the month include seeing Sultan Ahmet with snow with my Romanian friend Roxy before she returned back home, getting horribly lost multiple times while touring Istanbul with Cefi, buying a ukulele and seeing Büyük Valide Han at night with Esra and Keeleigh, and seeing the view from Sapphire mall with a few exchange friends/my host brother.

I have to say – my 7 day tour across the Western Side of Turkey was easily one of the best weeks of my life. I never thought I’d get so close with the 15 exchange students on the tour, but they really all became my best friends. The tour itself was amazing too – we got to see lots of Roman ruins, stayed at 5 star hotels, ate incredible food and even got to see a belly dancing performance.

First we went to Pamukkale, where we saw famous hot springs and the Hieropolis. The travertines (also called the “cotton castle”) look like snow but are actually formations of calcium with natural hot water running through them. The Hieropolis was the ruins of an ancient Roman city, and the amphitheater there was absolutely breathtaking to see. Combined, this was actually my favorite stop on the tour – the warm water of the springs was perfect since it was a bit chilly, and the Hieropolis was the first Roman architecture we got to see on the tour. We ended the first day of tourism by walking around the city of Antalya and enjoying the buffet at the hotel. 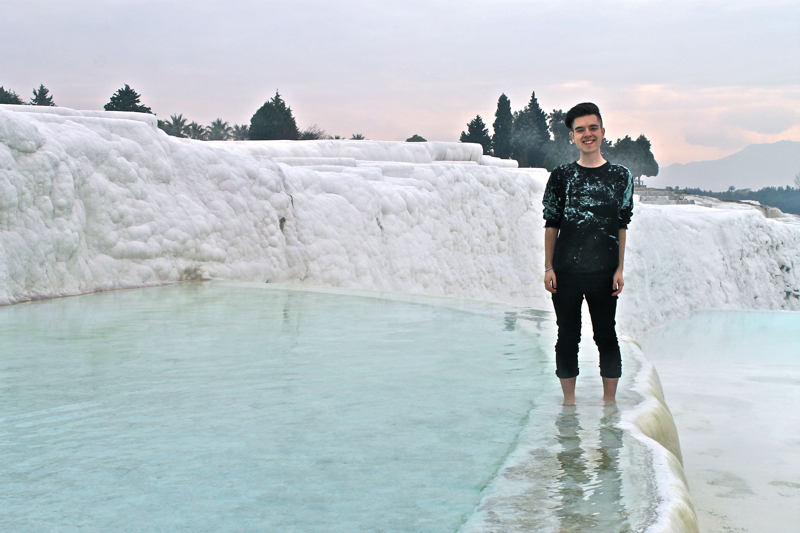 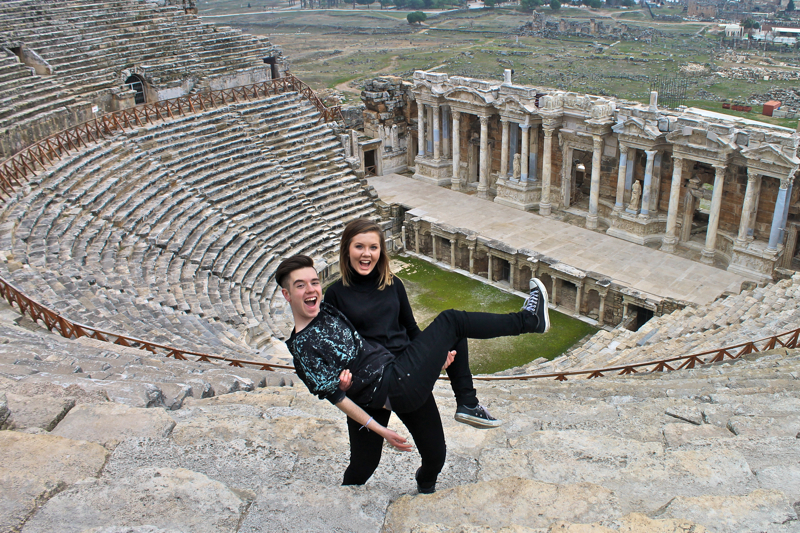 The next day we got to see Perge (the equivalent of an ancient Roman Shopping mall, full of ancient columns) and another huge amphitheater at Aspendos. Perge was also one of my favorite places on the tour – the amount of Roman columns definitely rivaled the Roman Forum in Rome. 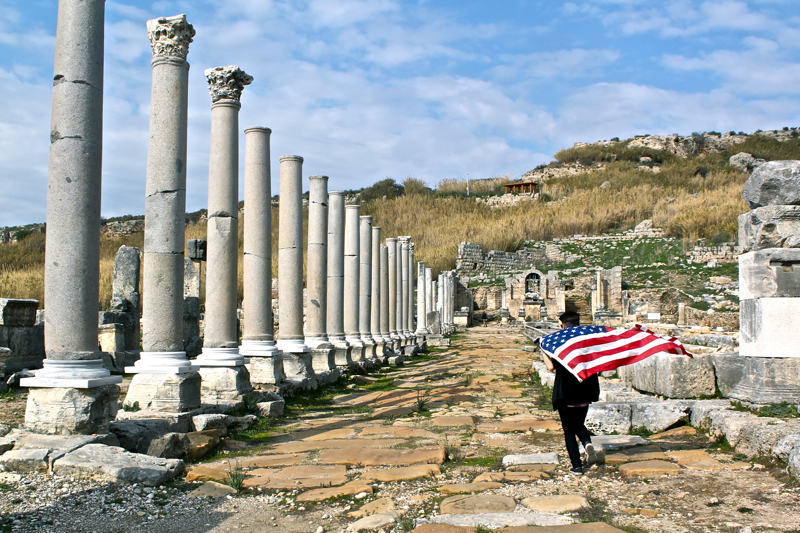 Leaving our wonderful hotel, we went on to see St. Nicholas’s church and go on a boat tour (which mostly resulted in us taking summer-looking pictures despite the freezing water.) 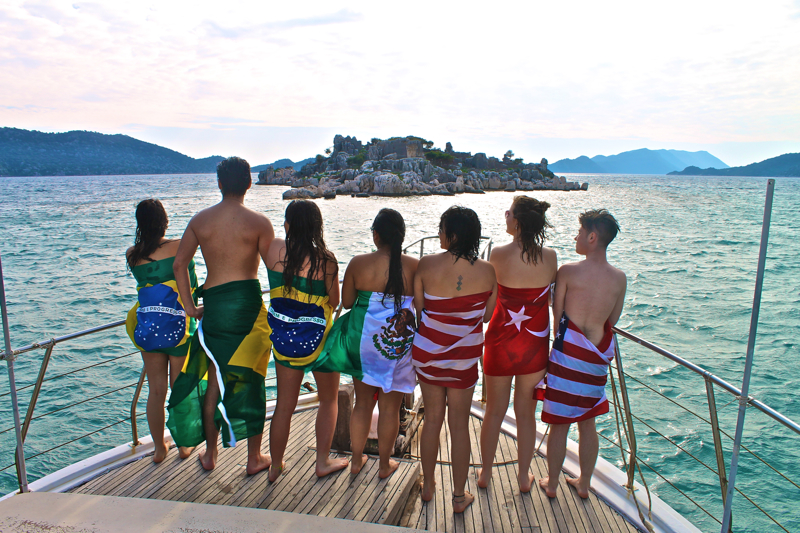 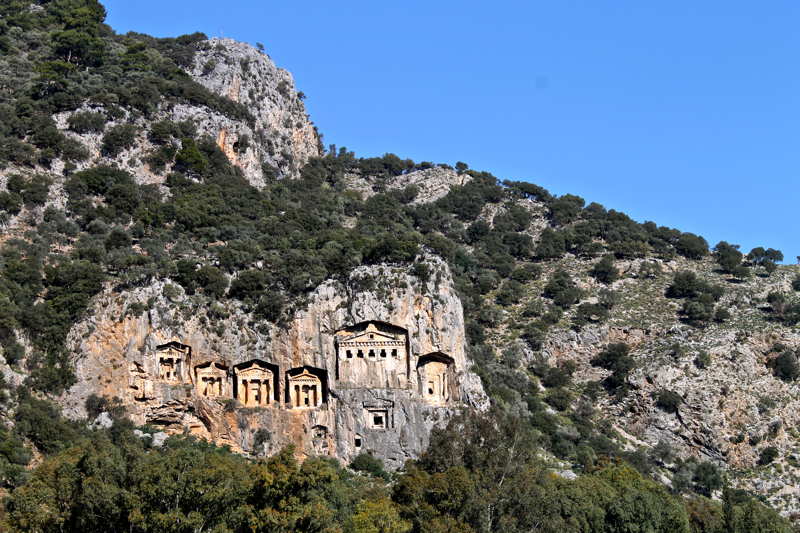 The sixth day was probably my favorite day of the tour. The first stop was the house of Virgin Mary, where we we got to make a wish, and my brazilian friend Rafa actually saved the life of a wild boar. Next, we finally got to see the Library of Ephesus, one of the wonders of the world. When I found I was going to Turkey, I dreamed of seeing this, so it was so cool to finally see it in person. Next we went to Pergamon, the ruins of a roman city on a hill where we saw the ruins of what was one of the most important libraries of the ancient world. We ended the day by going to an ancient roman hospital before going to our hotel to celebrate our last night of the tour. 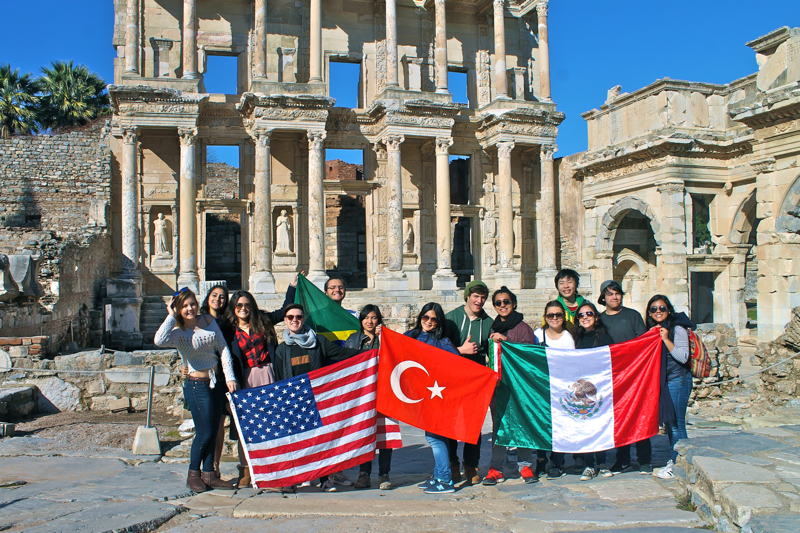 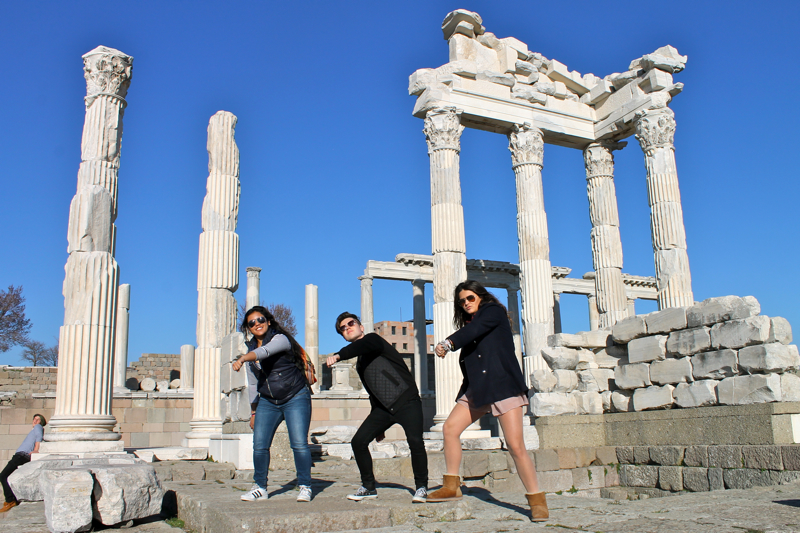 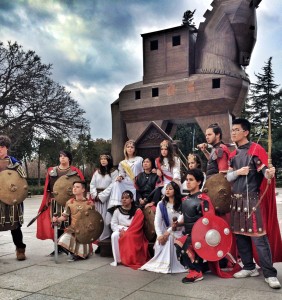 Extremely tired, we finished the tour by seeing Troy and a replica of the Trojan horse. We couldn’t resist paying 3 dollars to try on costumes and take a picture together as trojans.

I still can’t get over how amazing the trip was. Of course, I was a bit sick of seeing roman columns and “old rocks” by the end of the tour, but I still couldn’t complain about how many amazing sights we saw. Even beyond the amazing sights, the sleep deprived comments at the back of the bus and the crazy stuff we did at the hotels were some of the most memorable moments of the tour.

I didn’t realize how much I had missed Istanbul when I was gone until I came back. I was happy to see the traffic again, passing my school made me smile, and seeing bus 48 pass our car on the way home made me think “that’s MY bus.” Istanbul is no longer a big city that I live in, it’s my home and I’ve fallen in love with the little things. I can’t imagine how much I’ll miss it when I come home to my small city of 50,000 people.

My return date has really been looming over me recently as well. The past half of my exchange have gone by way faster than I ever thought it would, and I can’t believe I’ve been here 5 months. I actually have to book my flight home soon, and when I got the email I just closed it and pretended I didn’t read it. Yes, I’m excited to go to college and to start the next phase of my life, but I still don’t want this incredible year to end so fast. I know I’ll be absolutely devastated when I say goodbye to these amazing people.

I’ll update you all soon on the next few months of my exchange, probably late as always

-Cameron; alternatively spelled Camayran, or Cem if I’m in Starbucks because that’s easier to write on the cups

One Response to January and Tour of Western Turkey