If you came here to read a blog entry on the culture of Danish teenagers, you’ve picked the right blog entry.

Let’s start out with some background knowledge: Danish teenagers party. Maybe it’s because they can legally buy beer when they’re 16 years old, and most start drinking it once they’re 13 or earlier. When I heard that my school was having a party, I was picturing something that was more like Central’s Homecoming with beer. If I hadn’t been warned ahead of time, there’s no way I would have been prepared for the culture shock I’d experience at the party.

Let’s start with the facts. The cost was 11 dollars for me to buy the online ticket for the party, and I was invited via a Facebook event. The party was from 8:00 until 1:00 in the morning, so clearly it was going to be a bit different than a normal school dance. The thing that majorly sets this party apart from any other party at my American high school: the name of the dance. The “Signal Fest,” (Fest is party in Danish) was all about the color you were wearing, as it would….well I can’t even put this delicately…indicate the status of your sexlife. Yes, that’s right, my high school set this party up. The colors are as follows:

Red – In a relationship

Black – Hit by one or more STDs 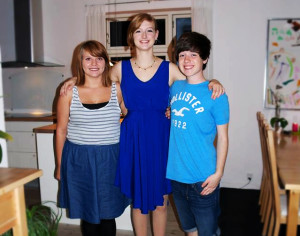 My friends and I before the party

Before you go crazy, just know that the whole party is a joke, and almost nobody takes it seriously. Since it was a joke, I naturally wore blue, which is the color that 80% of the people there were wearing. Most people dress fancy in their designated color, (Girls wore dresses, boys wore button up shirts) but it was perfectly acceptable to wear a normal t-shirt.

The party itself was most as crazy as the meaning behind the colored clothing. Luckily I got there early, so I got to be gradually shocked instead of being thrown into it. But what’s the fun in reading what it was like before the party really started? I’ll write about what you would have seen at about 11:30. 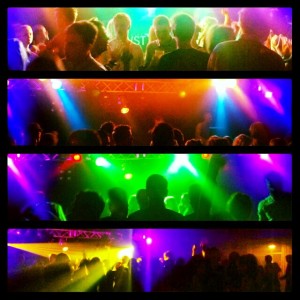 Pictures from the crazy school party

The room was packed with dancing drunk teens. The school had a professional DJ come, with really nice partying lights and a fog machine. Unlike the American homecoming, the music was actually good! Anyways, people were stumbling all over the place and dancing crazy. The floor was covered in spilled beer. (Beer could be bought at the school for about 2 american dollars, for about the same price as the water) The usually quiet and reserved Danes were loud and crazy (in a good way, actually!) Outside, each bench was taken by a couple making out. The people at the party were also really friendly, and I think I got a hug or two from every person in my class!

Even though it was slightly chaotic, it was kind of cool to see everyone having such a great time (even though some of them may not have remembered it the next day.) I ended up having an amazing time with my friends, and it was a great way to experience the culture. My first Danish party was a success, and I know I’ll be going to more in the future!