Everybody has something that they simply can’t do – for me, it’s sleeping on a plane. Though I was thoroughly drugged, I barely could get 2 hours of sleep before arriving in Istanbul at 9:30 in the morning. By some strange miracle, the excitement of arriving in Turkey kept me awake for the next 13 hours.

The flights were nice overall. I even got to check off “getting stuck in an airport bathroom” on my bucket list. I think my initial culture shock hit me when it seemed I was the only person on the plane not wearing traditional clothes. I thought people were staring at me, but then again it was probably because my Rotary blazer was dropping pins everywhere and I was ringing when I walked from the cowbell pin on my shoulder.  When I got off the plane, I was greeted with someone talking very fast in Turkish (I’ll assume she was complimenting my blazer) so I just answered with an enthusiastic “ahhh.”

After getting my checked bag, I was greeted by the friendly faces of my host mom and host brother, who were holding up a sign with my name. The car ride to the house was about 30 minutes, and I was surrounded by beautiful views of the buildings. Even the highways/bridges were decorated with lots of flowers, making it a beautiful ride.

After arriving home, my host brother Berkin wanted to show me around our suburb of Gokturk, which is a charming town that seems to have everything necessary (restaurants, supermarkets, stores, etc.) without having to go into the center of Istanbul. He started out by showing me my school, which was huge and very modern. I was particularly interested in the music building, which had a professional recording studio, an impressive auditorium, and many unlocked practice rooms with pianos. We’re not sure which grade or which class I’ll be in, but school starts around September 12. 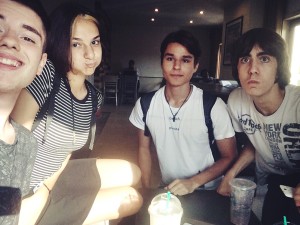 At Starbucks with my new Turkish friends

Next we went to a traditional Turkish restaurant: Starbucks. Okay, maybe it wasn’t exactly traditional, but it is a popular hangout spot for the school’s students. (The coffee also helped me stay awake.) At Starbucks, Berkin and I met up with two of his best friends, Kadir and Elif. Both of them were super nice and generally spoke English to keep me in the conversation! By coincidence, the other Rotary exchange student in Gokturk, Lara, was a few tables down from us. She’s been here a few more days than me but it’ll be great to know her since she lives so close. (Sidenote: I used a public restroom close to Starbucks and I was pleasantly surprised with how sanitary it was. Unlike most of Europe, it was also free! Nice job, Turkey.)

Kadir, Elif, Berkin, and I toured Gokturk, visiting two supermarkets and a music/book store. I have to say – I felt right at home walking around Gokturk and I know I’ll get used to it fast. My host mom picked me and Berkin up to take us home, where we ate a delicious supper, drank lots of tea, and went over Rotary’s list of “first night questions.” Somehow I managed to stay up an extra 30 minutes to write this blog post…I knew I’d forget a lot. 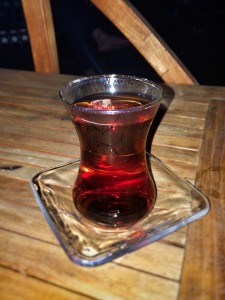 Turkish Tea is usually found in this shape of glass

Here are some first impressions that I observed:

I really think I am going to love it here. My family is incredibly nice and friendly, my suburb makes me feel at home, the friends I’ve met so far are really great, and I’m only a little public transportation away from the center of Istanbul. Even my host dog is wonderful. Never have I had so many new things happen to me in one day. Considering I was running on 2 hours of sleep, was constantly learning new Turkish words, and was combating jet lag, I think I did a pretty great job surviving my first day in Turkey.

I’ll meet with my Rotary advisor tomorrow, and I’ll meet all the exchange students at a meeting on September 3rd in Antalya. More posts to come!

4 Responses to First Day in Turkey